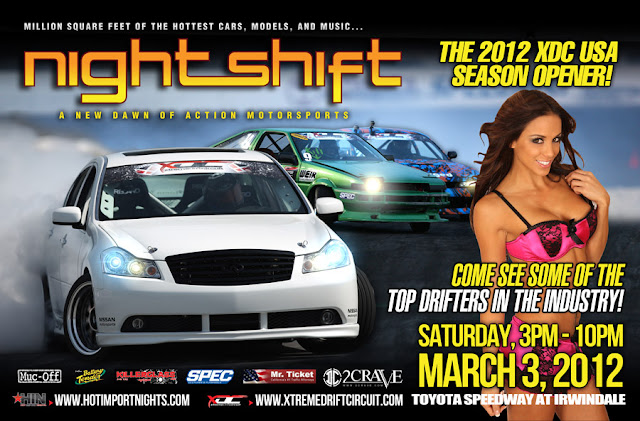 RAD Experience supports Night Shift and will be out to cover this event!

Night Shift in partnership with XDC and HIN
March 3, 2012 Saturday from 3pm to 10pm
Toyota Speedway at Irwindale CA

Some of event's highlights:

- Major Headliner Electronic DJ to be booked to keep up with the NightShift music festival standard. more to be announced within the next couple of weeks. and due to capacity draw, will announce the headliner closer to the event;

- Hundreds of models in attendance, over the next few days/weeks, you'll see more and more uploaded on the Hot Import Nights official Facebook Fan Page (under HIN Model photos)
- Major Digital Partnership to be announced shortly (involvement with Google+, streaming content from the events, as well as HIN Video Game Official Launch with over 100+ vehicle makes/models); and

Buy your tickets here. Enter "RAD" on coupon code to get $5 DISCOUNT on each ticket!!!!