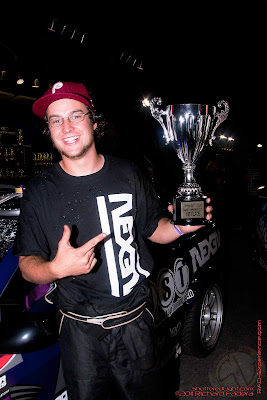 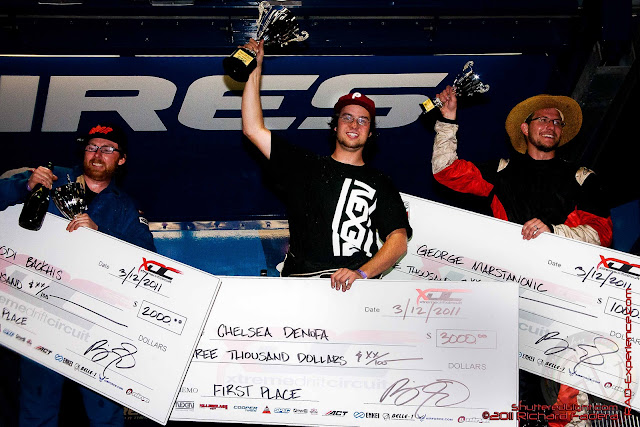 for winning XDC's 1st round for 2011 and defending his 2010 XDC Championship title. Taking 2nd place is Odi Bachkis, George Marcstanovic for taking 3rd and Joshua Steele taking 4th!
More about the event, models and sick rides are coming up within the week, for the meantime here is an official release from XDC.
DeNofa begins XDC Championship Defense with a win in Irwindale
March 12, 2011 (Irwindale, CA) – Chelsea DeNofa, from Seabrook, Texas, defeated Aurimas ‘Odi’ Bachkis from Wrightwood, California, in the final round of tandem competition at Toyota Speedway at Irwindale to win the first Xtreme Drift Circuit event of 2011.
George Marstanovic, from Flagstaff, Arizona, finished third overall after winning the Consolation Round when Maui, Hawaii’s Joshua Steele, driving the NST / NOS Energy Drink / Neverslo Nissan S13.4, was unable to make the second run of the round.
For DeNofa, the 2010 XDC Champion and driver of the Nexen / Non Stop Tuning / Technica BMW E36, the road to the final round was not an easy one. After qualifying first for the event, he enjoyed a bye run in the first round when Robert Turnbow’s Toyota Cressida was unable to compete. DeNofa then survived the toughest battle of the day when he went two One More Time’s against Forrest Wang before advancing to the Final Four where he had yet another One More Time against Marstanovic before advancing into the Final.
Backhis, driving the Forged Racing Radiators / Godspeed Nissan S13 and winner of the XDC Las Vegas event in 2010, also had to survive a One More Time against Will Parsons in the Great Eight. He then defeated Steele to advance to the final against DeNofa.
“It feels great to get the win after winning last year’s championship,” said DeNofa after the podium presentation where he was awarded a check for $3000 for his victory. As top qualifier, DeNofa also took home an additional $500. “I can’t think of a better way to start the 2011 championship. The Nexen / Non Stop Tuning / Technica BMW E36 was working really well and I’m really looking forward to the next XDC event in Arizona.”
Bachkis’s chance at victory slipped away in the Final when he had a correction as he followed DeNofa into the inner bank of Toyota Speedway. He still put in a strong lead run but DeNofa didn’t put a wheel wrong while following to seal his victory.
“I got really close to Chelsea as we transitioned and I didn’t expect that,” said Backhis, who took home $2000 for his runner-up finish. “Chelsea was super fast which made it a really fun tandem round, it was too bad that I made the mistake on the first run.”
The drivers of XDC Irwindale earned $9000 in cash prizes, with $1000 paid to the top-three drivers in qualifying and the rest paid to the top eight drivers in tandem competition.
DeNofa’s quest for a second XDC championship will resume April 22-23 at the XDC West championship event at Firebird Raceway in Chandler, Arizona.
Posted by Unknown @ 11:20 PM
Posted under: News/Articles